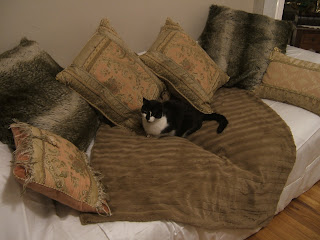 I invited my teagroup and their husbands, fiancees, etc over for a Christmas Soiree. It was actually an open house. I served appetizers and desserts. The forecast was for a blizzard and I had people coming from all over New England, Maine, New Hampshire, and Massachusetts. Luckily, the snow did not arrive until around 1AM and the party was over before rhe storm hit.

Hours before the event, my friend Don and I plumped the sofa pillows and carefully placed the throw only to have Oscar jump on it and undo all our hard work. 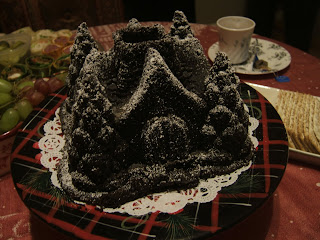 I hired my friend Mary to do the baking for the party. I wanted a sort of Hansel and Gretel cottage-like cake, a chocolate cake with a dusting of "snow". Mary made this gorgeous Midnight Velvet Cake, oh the smell of it! It was a feast for the eyes and the nose. Only one problem, it was so beautiful we didn't want to cut it!
Finally my Sister took the knife and cut out only the chimney so we could taste the cake and still enjoy it's beauty. 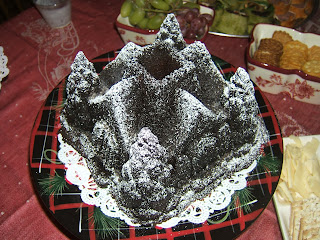 Here's another view. I took this one with a flash. 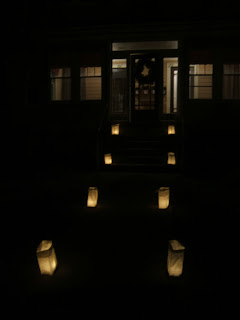 I have a very dark entrance to the condo. So I decided I would like to line the steps and walkway with luminarias. Cream colored bags were filled with kitty litter, glass votive cups and white votives. Ir was very windy and we only had to re-light one of the candles. We kept checking to make sure there were no fire hazards. It looked so beautiful! My Sister and Don went outside (it was bitter cold with the wind chill) and set up the luminarias for me. 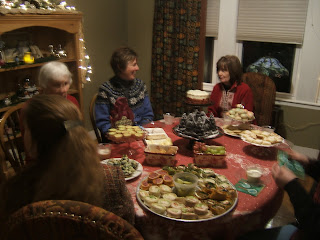 We had little pinwheel sandwiches along with mini quiches and cheesy stuffed mushrooms (Paula Deen's recipe). 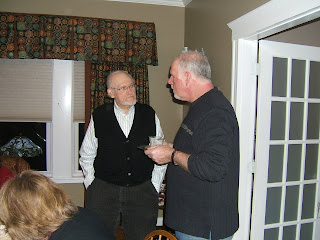 We had good conversations. 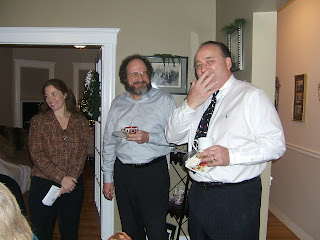 Is Roger feigning surprise? He knows I always have a camera in one hand. 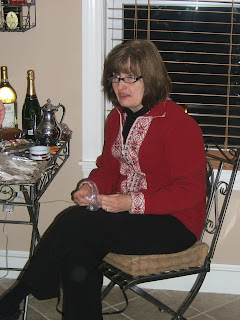 Sheila was part of the "kitchen crew". She helped bag the gingerbread "snowangels" which would be given out as party favors at the end of the night. 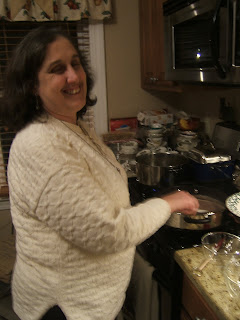 Here's Mary stirring the hot chocolate. I served MarieBelle Aztec Hot Chocolate.
If you are a serious chocohoic used water instead of milk. But we used milk because we were going to float snowflakes in the hot chocolate. 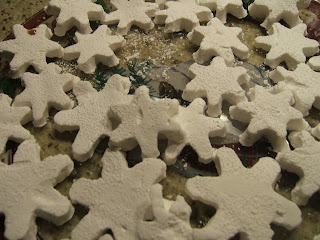 A tray of snowflakes waiting to float in the hot chocolate. I saw the idea in a Martha Stewart Living magazine a few years ago. They're made with gelatin. Mary made them for the party and they came out so cute. 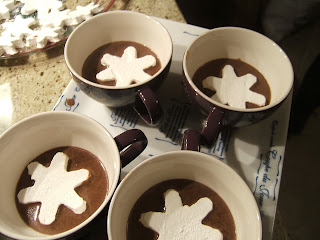 Look how sweet they look in the hot chocolate. We also had a White Christmas punch and mulled apple cider that made the condo smell heavenly! 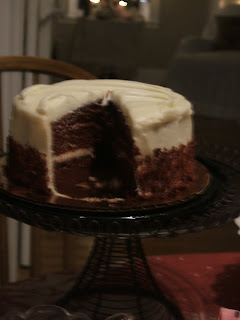 We also had a red velvet cake as a secondary cake. Good thing since we did not want to cut the Hansel and Gretel cake. 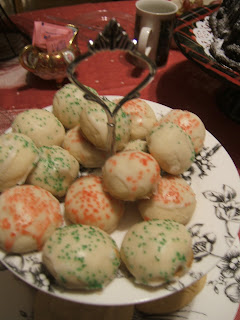 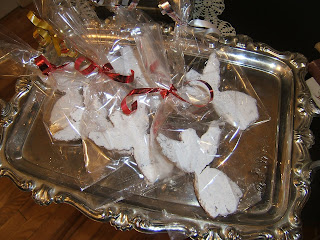 Here are a few of the remaining snow angel favors. A few of them broke so we were calling them fallen angels. Mary said they all had Scarlett O'Hara waists so they would break in the middle. But they were cute and delicious so it was fine.

I think a good time was had by all. I know I had fun with the preparations. Well I had fun decorating and coming up with some of the ideas. I never enjoy housework.

I took photos of the condo and the decorations. I'll post them sometime this week.
Email Post

Michelle said…
Okay there is a NEW Martha Stewart in town. What a wonderful soiree!! You are such the perfect hostess. I LOVE that cake..and those marshmallow stars are so adorable in the hot chocolate. Oh I wish I could get into the spirit but not this Christmas. Keeping us all relaxed after the move is my goal. I am LOVING your new header too. How cute!!!

Have a wonderful holiday season if I don't get to visit before I leave for California.

Lots of love and hugs...

Julie@beingRUBY said…
How Beautiful
From top to toe... just gorgeous

the cake is amazing... I can see why you didn't want to eat it, although I hope you did eventually!!

The pillows are wonderful too!! did you get them online... quite nice... I think i've left my xmas run just a little late... haha

Well I think everyone must have had a glorious time... good fun and friends... what more can you ask for? Have a great Xmas and thanks for visiting me all this year. I've enjoyed your company and travelling via your post! xx Julie
December 21, 2009 at 5:27 AM

Salmagundi said…
Looks like a great party! I would love to see your whole condo all decked out for the season. Have a joyous Christmas. Sally
December 21, 2009 at 9:01 PM

A New England Life said…
Every year I kind of wish we could host a party for friends but things like that tend to stress me out. If I knew it would go as well as yours I'd attempt it!

Your such a social lady. What a great party! I hope you at least tasted the cake!!!!