Reminiscing about the Illumination Night Tea

Saturday's Illumination Night in Maine brought back memories to me. One memory of last year's trip to Martha's Vineyard and another of an Illumination Night Tea I hosted with my friend Kim back in 2007. At Kim's house we tried to recreate illumination night and the feeling of being on the Vineyard. I thought you'd enjoy reminiscing with me. 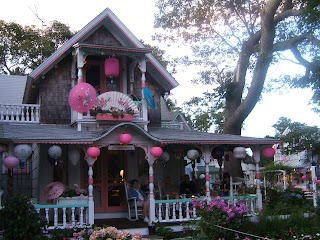 Here's a cottage on the Vineyard, all decorated and waiting for the evening's festivities. 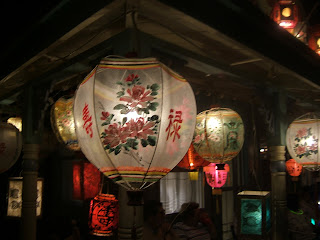 And here's the illumination of the lanterns on the Vineyard. 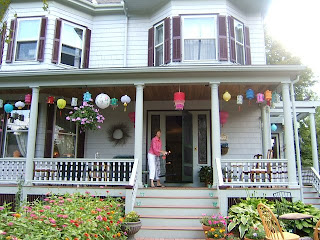 Kim had never been to an illumination night so we decided that I would do the decorating for the party and she would handle the food. After all, she is the better cook. 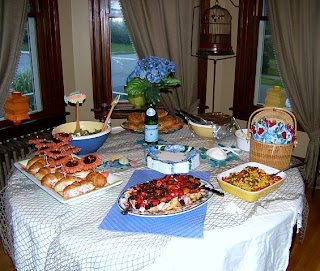 Here's the tablescape. We served buffet style. Kim made a chicken dish with fruit compote and a dish with corn in it. Sorry, I forgot the details. We also had seafood salad rolls and a spinach salad with cranberries, goat cheese, and walnuts with a raspberry vinaigrette dressing. We used paper plates and napkins and a fishing net for a casual feel. The plastic flatware was housed in a Nantucket Basket. Faux hydrangeas were placed in a Pellegino water bottle which served as a vase. 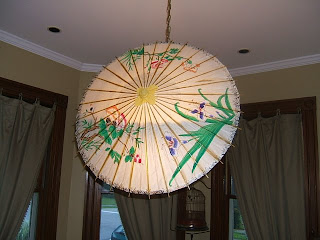 A rice paper parasol was placed over the dining room light.

We made favors for everyone. I had seen an article in Martha Stewart magazine about making beach glass jewelry so I mentioned it to my artist sister. I was secretly hoping she would help us make the jewelry. My sister came through for us. She adapted Martha's idea into something more simple. Instead of drilling holes in the beach glass, we wrapped silver wire around the pieces and made a bale at the top. We then slipped a silk cord through the top and voila, beach glass necklace! We had assorted colors of beach glass and various colored cords.

Then we made little pyramid shaped boxes out of maps of Martha's Vineyard. We wrapped the necklaces in tissue paper, placed them in the boxes and tied the top of the box with raffia. 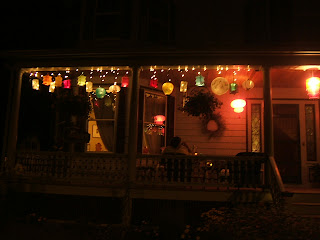 As soon as darkness arrived, we flicked on all the light switches and we had our own grand illumination. Earlier in the day, Kim's husband had hung those icicle Christmas lights all around the edge of the porch and I covered the bulbs with the lanterns. 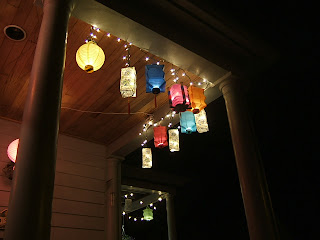 I have to admit the lantern illumination came out much better than I expected and it looked pretty darn close to the illuminated cottages on the Vineyard. 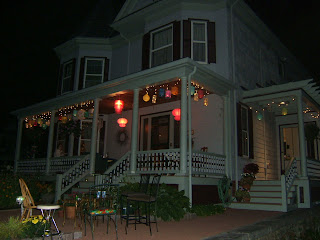 The many hours of planning and preparation were all worth it when one of the guests told me the evening was "magical".
Email Post
Labels: illumination night

Unknown said…
What a brilliant idea. I love it. I think I'll try and do something similar on Aug 19 which is the date for Illumination Night this year.
One thing I always do is watch my video of the community sing and walk around the Campground looking at all the decorated houses. It's the best I can do until the next time I'm on the Vineyard for the real thing.
Joan
August 6, 2009 at 10:09 AM

Allidink said…
Love it! What a cute necklace! The parasol is so cute.

Janet said…
Hi,
I just found you thru a weather comment on Cindy's blog. I also live in NE (South of Boston, North of Providence) and can commiserate. I enjoyed your post about Rockport; I haven't been there in many years and maybe I should plan a day trip soon. Thanks for the idea, we are daytripping to Ogunquit (sp?) next Friday, weather permitting.

Nancy said…
Your illumination light pictures are about my all time favorite on Flickr! Love your party - I'd love to do one.
xoxo Nancy (your Flickr pal!)
August 21, 2009 at 8:42 PM