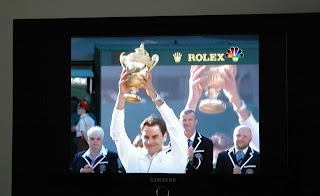 Last Sunday, I hosted my annual Wimbledon Breakfast party. Every July, I have my friends and family over to watch the Wimbledon Gentlemen's Final and to eat a hearty breakfast.

As you all know, Roger Federer won his sixth Wimbledon title. He beat American Andy Roddick on the 4th of July weekend. That's just wrong! 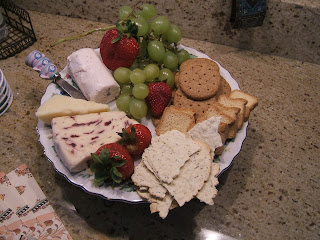 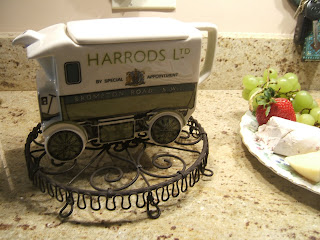 My sister'a teapot from Harrod's was filled with Harrod's No 42 tea (Earl Grey). 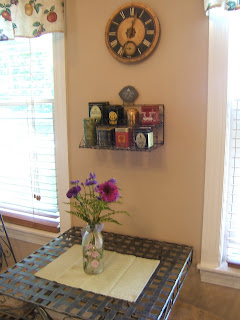 A purple and green bouquet reflected the colors of Wimbledon. The tea rack held more selections for the guests should they tire of Harrod's No. 42. 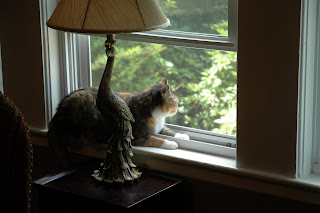 Molly got distracted by something outside the window. 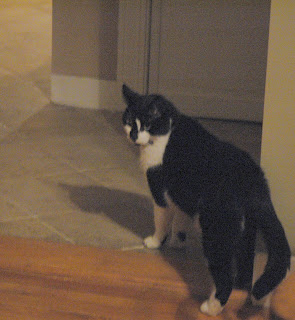 Oscar got tired of watching the long match. He wanted to play his own games. 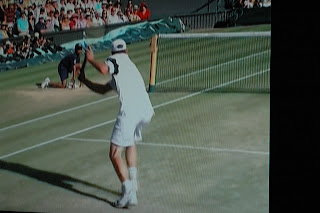 Andy Roddick gave it his all. 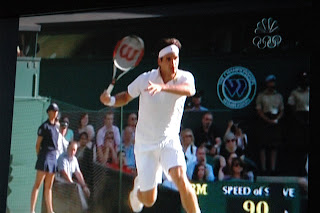 But Roger Federer had all the graceful moves and he persevered. 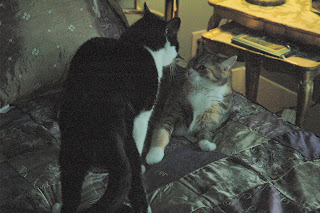 Evidently, Molly and Oscar had a little difference of opinion. 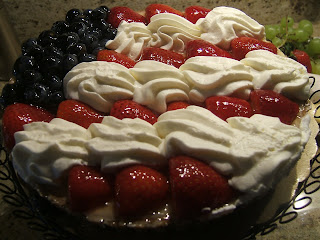 Ww had baked french toast, frittata, fruit salad, scones with lemon curd, strawberry jan and mock devonshire cream. This fruit tart was just one of the dessert selections. Everyone made something for the party. 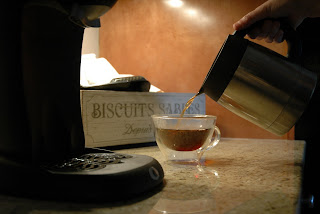 I served Starbucks coffee to finish off breakfast. 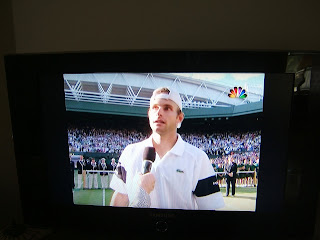 In the end, heartbroken Andy was gracious. He pushed Roger to the limit but like all true champions Roger found a way to win. It was quite the match and a jolly good time for the spectators, especially those watching from home.
Email Post
Labels: Wimbledon Breakfast

Michelle said…
Now you, my dear, are the perfect hostess! Love the cheese and cracker presentation in the beginning....and that fruit tart! How adorable!!
July 8, 2009 at 2:48 AM

Salmagundi said…
Yummy looking food! I loved the Harrod's tea pot. All I brought home from Harrod's was a tea towel, but thoroughly enjoyed walking around their kitchen department. It's nice your friends & family can count on a fun Sunday a.m. every year to watch Wimbledon. Sally
July 8, 2009 at 10:22 AM

Unknown said…
That sounds like a fabulous tradition! The berry tart looks delish! That teapot is very cool!
July 9, 2009 at 2:09 AM

Love to watch Tennis too!