My One Year Blog Anniversary

Exactly one year ago today, I started my blog. Without a plan or any idea what I was doing, I got myself to that blogger template and started playing around. Pick a name, ok. Pick a layout, ok. It was really pretty easy.

Those of you who follow my blog know of Oscar, my cat but you may not know the entire story. Here he is in a camera shy mood. 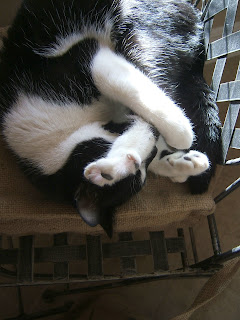 And here he is in all his handsomeness. His journey over the past year has been a long one. After feeding him for 3 months, I rescued him, bringing him indoors. Again, here's the recurring theme, without a plan or any idea what I was doing, I decided Oscar needed me to save him from himself.

Oscar was living in my apartment parking lot and depending on a number of good people who lived in the building to feed him. Anyway, June 22nd I grabbed him, threw him in a cat carrier, and thought now what? I brought him to two animal hospitals before he could get an appointment. He was given an exam and shots. Amazingly, he did not have any diseases and they guessed he was maybe a year old.

I arranged to have him neutered and I paid for his exam, shots, and surgery and to board him for a week. I immediately started asking around if anyone could give him a home. My landlord was fed up with me for feeding this stray cat and he would not let me keep Oscar.

My sister did an email blast to everyone she knew. Her friend Debbie said she had a friend who might take Oscar for the short term. She had a big house and one of her cats had died recently. So we made contact by email and sure enough, this guardian angel of a woman, Diane said she would take Oscar for three months.

I checked Oscar out of the animal hospital ( two weeks and $650 later) and drove him to Diane's. Diane's house is fabulous and is surrounded by woods. She did not let Oscar out but he had plenty of windows to sit in and watch the local wildlife. He flourished with Diane and her partner Michael. Michael built Oscar a scratching post and Diane gave him daily loving. Diane let me visit Oscar every week! 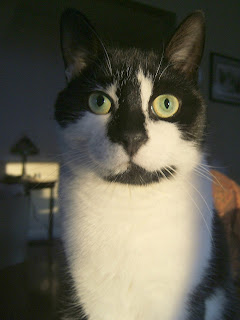 I moved out of my apartment and away from the animal hating landlord ( I'm being kind here).
I bought a condo, some say because of Oscar. Oscar moved in with me on December 30th. Yes if you do the math this is way longer than three months. Diane was so sweet, letting Oscar stay much longer than I expected.
Diane and Michael still visit Oscar and they have become my friends. They are always welcome in my home and Oscar will always have a special bond with them. 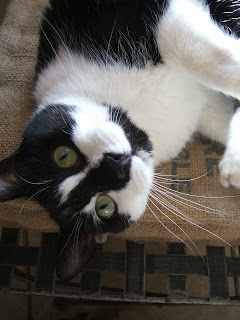 Anyway, here's his silly pose when he thinks he's a circus performer. He loves this cushion and has claimed it as his own. Who would sit there anyway? Unless you want cat hair on your backside. 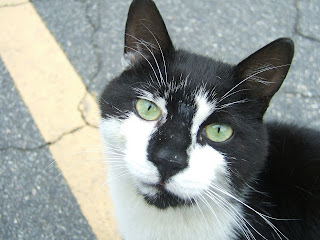 Anyway, here's the before photo of Oscar. Skinny, dirty and desperate for love. The look in his eyes told me he needed help and of course I needed to be his guardian angel. I don't like to look at this photo, it makes me too sad to think of his "street life". The main thing is he's happy and
healthy today and the dangerous life is behind him. The journey has been worth it.
And back to the blog anniversary. Another story of jumping in without a plan. Sometimes you just have to take the leap of faith and if you do, something wonderful can happen! I've enjoyed every minute of my blogging experience. I hope my readers have enjoyed the journey too!

Anonymous said…
Happy blogaversary. Love the story about Oscar, and the photos... what a sweet kitty.
Hope you're feeling okay.
Joansa
May 17, 2009 at 2:47 PM

Anonymous said…
Oscar is a beautiful cat, and I love the compassionate story of how you saved his life. It says so much about you you are.
May 17, 2009 at 2:52 PM

A New England Life said…
I wish I could have found your blog long before I did Elaine. But I'm glad you finally found mine : )

My 1 year blog anniversary is coming up on June 8th. Can you believe my very first post was about my cat also? My sweet Cybil had just passed away at the age of 17. So hard to let them go. Thinking about her now, I can't believe she isn't with us. Cat's can enrich your life beyond measure.

You and Oscar were meant to be together. Just look at the way he looks at the camera! He knows you saved him! And I love that pretzel pose.

Allidink said…
Oh good for you for rescuing Oscar! I too try to feed all the stray kitties in my apartment complex. You are awesome for doing all that for him! He has the cutest little face! Happy one year blog anniversary! What a great thing to start your blog with and commemorate your one year :)

Unknown said…
Awww...what a sweet cat mama you are! Lucky Oscar. I'm sure you feel lucky to have him, too! He looks like a sweetheart!

Sweet Sage said…
Happy Anniversary, Elaine!
I LOVE everything about your blog. Of course, the kitty stories are my fav, but i love reading about all of your travels and teas and good times .. please keep them coming!
My Best To You ~
(and so sorry about your accident)
~ kim
May 18, 2009 at 10:25 AM

Lou Cinda @ Tattered Hydrangeas said…
Chaelaine: I love your cats and I am a lover of cats too! I have three who are 11, 12 and 13 years old, so they are like my children! I just found your blog and love it! I am a follower!

Julie@beingRUBY said…
Happy Anniversary. I am not really a 'cat' person (ssshhh dont
tell anyone). But once when I was living in a house rather than apartment, I met a cat that would talk to me at 3am when I had finally finished work and study for the day. I thought I was going cookoo!! This cat which I called Maddie would lift it's paw and wave to me. I kept Maddie for a few years until I had to move to an appartment. A friend's mother took her and she is now a princess with her own room!! Thanks for Oscar' story... he reminds me of Maddie!
May 23, 2009 at 3:16 AM

♥Mimi♥ said…
Happy anniversary. Of course, of all your blog posts, it is this one that is my favorite. To know that this little man needed you and that you stepped up to the plate, so to speak, is music to this rescue person's ears☺ Give him a cuddle for me.
May 23, 2009 at 1:29 PM

Sara's Sweet Surprise said…
Hello Elaine~ I just had to respond to this post. What an amazing story of love and compassion. as I read your words I could identify with so well to your experience. I rescued two of the three kitties we had in our home. The joy we brought to each others lives was immeasurable.
Thanks for sharing both Oscar and his journey to finding his forever home.