Can I get a weekend do- over?

It's been a long time since I had a three day weekend. So this weekend I treated myself to one.

In my prior post, I mentioned that on Friday I spent a wonderful day with my friend Lori Lee. She lives in New Hampshire so we don't see each other that often. We spent the day shopping and eating, shopping and eating! It was sort of a mini vacation.

Saturday I slept late. I had no morning obligations. No charity teas to plan, no homebuyer fair booths to man, no participation in any city trivia bees, nothing work related at all. After getting about 9 hours of sleep, I woke up refreshed and planning to do a few errands, a little cleaning,
and a nursing home visit to see my mom.

Well, I did the errands and got the nursing home visit in. After that I decided to go shopping for my mom's day gift. I knew what I wanted and where to get it. I could have gone to the closest store which is in the next town to me but no. The store two towns away is bigger and better so I was headed there. I entered the interstate and passed a few exits when suddenly, disaster! 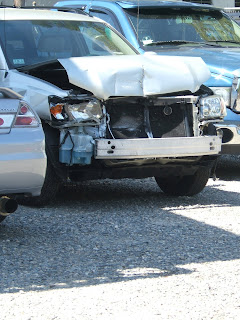 On a perfectly sunny day I cracked up my car. I was in the slow lane, thank God! Traffic was merging to go onto another route and I was trying to get out of their way by switching lanes. While I was looking in the mirror to see if I could enter the second lane, someone, three cars in front of me evidently jammed on their brakes. They drove off unaware of the chain reaction accident that they just created. The second car then stopped, forcing the car in front of me to swerve to avoid hitting her. I didn't know she had stopped but I saw her once the guy in front of me swerved off the road. Of course, I hit her.

I wasn't going that fast. But I hit that car with quite a force. I have an SUV. A crunching sound, then my airbag deployed, a popping sound, then the airbag hit me in the chest, and then a chemical smell and the bag deflated. I thought I had smoke inside and outside of the vehicle. But it was just powder from the airbag. The smoke outside, my radiator had been punctured.

The witness, the guy who swerved, asked me if I was ok and asked the woman I hit if she was ok. We both were shaken but able to walk. Her passenger was saying she was ok but she didn't want to move. She had neck pain. 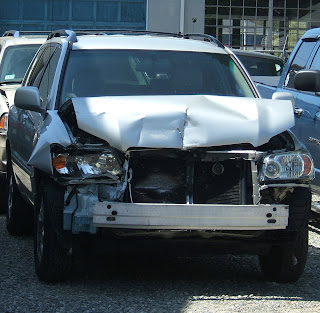 Well the photos tell all. My car took the brunt of the damage. Her car had less damage. On mine, the bumper came off, the hood collapsed. I think there must be damage to the frame, and the air conditioner and obviously the radiator. We'll have to see what the insurance adjuster says. 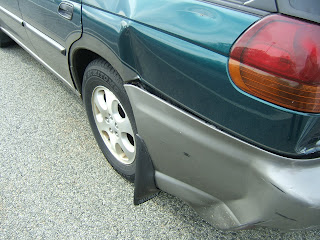 Her damage: her back door wouldn't open, the muffler fell off, but her car stood up really well. I have to say mine did too because I walked away from the accident with just bruises and soreness. It could have been so much worse.
So like in the movie Groundhog Day, I would like to do over Saturday. I would go to the store closest to my home, I wouldn't get on the highway. I would have a present for my mother for Mother's Day, my sister would not have to be my taxi driver, my friend Don wouldn't have to disrupt his plans to pick me up at a towing station. I wouldn't have to worry about deductibles, insurance claims, car rentals, and a possible car payment again! 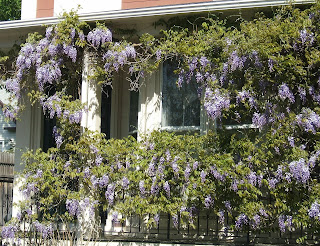 And I could get back to my mini vacation where I can stop and smell the wisteria!

Allidink said…
Oh nooo. We can't live in the past though don't think about the what if, you'll just drive yourself nuts. Hope you had a nice Mother's Day.

Michelle said…
OMG, I'm so sorry this happened to you!!! How terrible. I can imagine how shaken up you were. That actually looks like some substantial damage. I mean you can get shaken up by a tap I can't imagine how you felt when this happened. It only takes a second..isn't that what they say. :( I hope you are doing okay!!
May 11, 2009 at 1:50 AM

Deanna said…
Oh no Elaine! Thank heavens that you are all right! Michelle is right about what she says about even the smallest tap can shake you up so you'd better take it easy and if you start to get headaches or twinges please go see your doctor pronto!

Cindy said…
Oh so sorry about your accident! Who knows, maybe you were meant to go to that store because something so much worse would happen if you hadn't....you never know!!!
May 14, 2009 at 10:12 PM