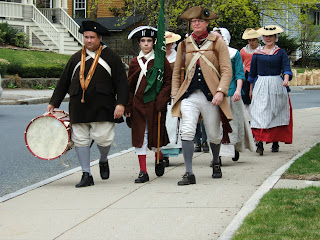 Listen my children and you shall hear

Of the midnight ride of Paul Revere,

On the eighteenth of April, in Seventy-five;

Hardly a man is now alive

Who remembers that famous day and year.
He said to his friend, "If the British marchBy land or sea from the town to-night,

Hang a lantern aloft in the belfry archOf the North Church tower as a signal light,

--One if by land, and two if by sea;And I on the opposite shore will be,

Ready to ride and spread the alarm

Through every Middlesex village and farm,

For the country folk to be up and to arm." Excerpt from "The Midnight Ride of Paul Revere"by Henry Wadsworth Longfellow.


Today is Patriot's Day, a Massachusetts holiday. I planned to go to a battle reenactment but I canceled my vacation day and caught up at work. I am posting some photos from a fewyear's ago. My friend Pauline had a Paul Revere tea at her home. She lives on the Paul Revere ride route. How's that for a historic street? 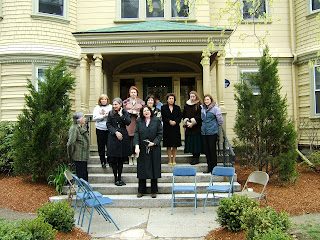 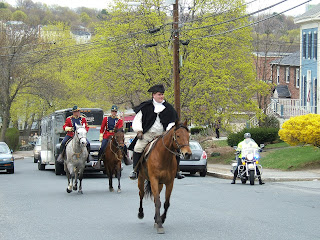 First William Dawes and his entourage rode by. 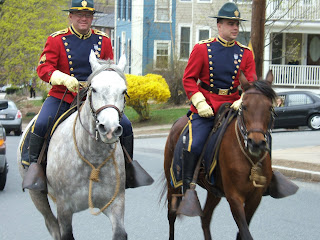 The horses were beautiful and don't you love a man in uniform? 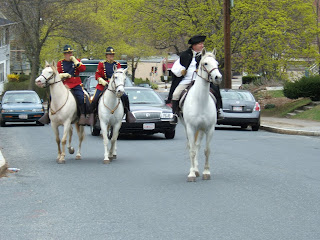 There he is on his white horse. Paul Revere! 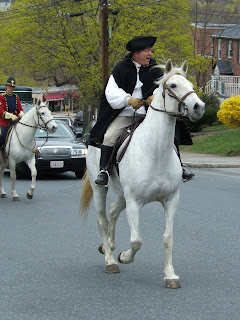 He actually slowed down for us and gave us a photo opportunity. 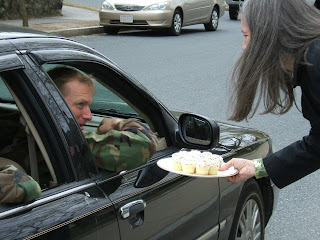 Amanda offered the men in the entourage some refreshment. 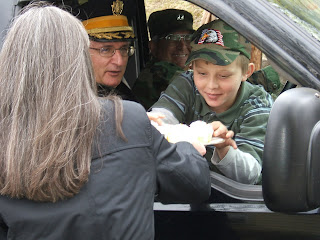 The smallest member of the group was quite excited. 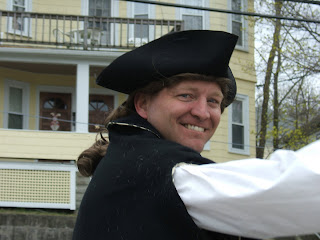 There's Paul, happy to oblige the camera. To read more about the Midnight Ride
click here

Allidink said…
How cool! I wish I could check that out sometime. I love history.

Michelle said…
How fun! I've never heard of this. I love re-enactments. We don't have many around here but I seem to remember recently seen something going on around here with a civil war re-enactment. :)
April 21, 2009 at 1:28 AM

aspiritofsimplicity said…
I was going to go to Concord on Saturday but had so much going on that I couldn't make it. I hope to get there next year. Even though it all happened so long ago, it still gives me goose bumps to be on those same streets.
April 21, 2009 at 6:42 AM

Unknown said…
You really brought to life the ride of Paul Revere. Thanks for the look back in history.
April 21, 2009 at 9:36 AM

Antique Therapy said…
I participated in the reenactments on Sat with the Sudbury corp. My family has been involved for many years. My brother is a fifer with Sudbury as well as a group called The Ancient Mariner in Conn. Sat was such a nice day for the event. I think I also told you I used be a dealer in Concord but moved into much bigger space in Sterling at The Cider Mill aka Oh My Gosh Antiques!! We seem to share alot in common. I would love to switch links with you if you want. LOve your blog!!

A New England Life said…
I didn't know they did that on a yearly basis. That's great! Massachusetts is so historic and interesting.

One day I hope to walk the Freedom Trail with husband. Have you done that yet Elaine? I've walked some of it twice when both my daughters were in 5th grade. Both times it was hot as hell too! lol!

You should have been in the photo!

Sea Angels said…
My goodness I am stunned into silence what a fab post !!!!I wished I was there I would love to see it, thankyou SO much for sharing this...noe I want more please ha ha...
Lots of springtime hugs
Lynn xx
April 21, 2009 at 3:19 PM

kayellen said…
Oh Elaine!!!
I just love this! History is amazing in Boston! How wonderful that they celebrate and reminds us of these events from the past!!!

Thanks for taking us along the freedom trail!

vintage chic mom said…
We had to memorize "The Midnight Ride of Paul Revere" in 5th grade (close to 35 years ago now!)....I still remember most of it, particularly the passage you posted. How thrilling it is to have the visuals to go along with it. Thanks for sharing!