10 Things you didn't know about Ireland 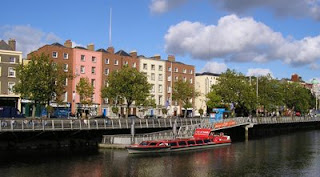 Today I give you some interesting tidbits about Ireland that I found at http://www.irishcentral.com/


Check out our photo gallery of these surprising facts

Brown’s family left Foxford in Co. Mayo for Philadelphia in 1786 when he was aged 9 and his father died of yellow fever soon after they arrived in the U.S.

He led an adventurous early life: he fought in the Napoleonic wars, was taken prisoner-of-war, escaped to Germany, before somehow ending up in Uruguay, where he became a sea trader. He then founded the Argentinean navy, when it was at war with Spain.

Today there is a statute of Brown in his hometown of Foxford, Co. Mayo, which was unveiled in 2007, the 150th anniversary of his death. in Argentina, there are 1,200 streets, 500 statues, two towns, one city and a few football clubs named after him.

3. Only two members of U2 were born in Ireland

Only Bono and Larry Mullen Jr. were actually born in Ireland.

4. The British Embassy in Tehran is on a street named after an Irishman

In 1981, shortly after the death of IRA hunger-striker Bobby Sands, the Iranian government changed the name of the street where the British Embassy is located from "Churchill Boulevard" (after the British Prime Minister) to "Bobby Sands Street."

British Embassy Staff were then forced to route everything through a side door in the building to avoid showing their address as The British Embassy, Bobby Sands Street, Tehran.

5. Up until around the early 1990s, Ireland had a low per capita consumption of alcohol

When the word "Irish" comes up, "drinking" is never far behind. And today, Ireland alcohol's consumption is very high by international standards. A 2006 survey found that the Irish spend a higher proportion of their income on alcohol than anyone else in Europe. It also found that the Irish were the worst binge drinkers in Europe. So the recent evidence supports the old Irish drunkard stereotype.

But Ireland's alcohol consumption per population was moderate for much of the 20th century. There was a high level of alcohol abstinence in the country – something usually more associated with Protestantism – which was promoted by the Catholic Church.

As the Church's moral authority declined, however, and as the country became wealthier, the Irish started to drink a lot more - finally earning themselves that old heavy-drinking stereotype.

6. A Belfast hospital is a world leader in kneecap reconstruction

During the Troubles, the Royal Victoria Hospital in Belfast had one of the top trauma units in Europe. At one point as many as 100 victims of "limb executions" were being treated by the hospital every year, whose advances included external “limb scaffolding" that enables partial healing for bone damage too severe for reconstruction.

7. Ireland has the fourth largest stadium in Europe

Dublin's Croke Park, the headquarters of the Gaelic Athletic Association, is the fourth largest stadium in Europe. The 82,300-capacity stadium was redeveloped in 2005 and is now the fourth largest: only Camp Nou in Barcelona, Wembley in England, and Olimpiysky in the Ukraine, are bigger.

Rugby and soccer were banned from the stadium up until 2007 because of a long-standing rule banning “foreign” games. The rule was relaxed when the country’s main soccer and rugby stadium, Lansdowne Road, was closed for redevelopment.

Even by Irish standards, 2007 was a wet summer. By August 24, it had rained in Ireland for 40 days - fulfilling an old Irish proverb that says it will rain for 40 days if it rains on St. Swithin's day (July 15). The rain usually takes a break in the summer for a couple of weeks and the rare sunshine sends the country pure mad!

In 1995 you could get Playboy TV but you couldn't get the magazine, which was banned under the censorship laws.

10. More Guinness is sold in Nigeria than in Ireland

That's right: Ireland is the third largest market for Guinness. Nigeria is at second, and Britain is first.
Email Post
Labels: Ireland

Allidink said…
Wow, how neat. I learned a lot lol. Thanks!