Molly and Oscar- A Tale of Two Kitties

Oscar is finally in his forever home. Actually he's been living with Molly and me since December 30th. I guess you can call him my New Year's baby. I am enjoying the new addition to our family. Molly? Not so much. For those of you who want to get up to speed. Go to my very first post entitled "Starting from Scratch". All may look peaceful here but don't let them fool you!
Oscar chases Molly all over the condo. She is certainly getting her exercise. She's 7 years old and he's just 1 year old. Molly is plum exhausted from his antics.

This is Oscar's usual state. Hiding and about to pounce! He still has his wild side. Poor thing has lived in 4 places in his young life. First he was outside in the bitter cold last winter, crying for food scraps in the parking lot of my apartment building. I met him on Valentine's Day night! Then in June when I rescued him I took him straight to the vets. He stayed there
for 2 weeks while I searched for a foster mom for him.
My sister sent out an email blast to all her friends and we found Diane and Michael who had recently lost their 20 year old cat. Diane said she would foster Oscar for 3 months. So off to
Diane's he went. He loved it there. Sleeping on a sheepskin rug, catching an occasional mouse and getting lots of lovin'. He was in kitty heaven. I visited him weekly to keep in touch. Diane and Michael could not have been a better match for Oscar's temperament.
Finally I bought a condo and moved in with Molly. I got her settled and then I was able to finally take Oscar home. It's been an adjustment for all of us. Diane and Michael come and visit and play with Oscar. Molly has learned to ignore him at times and I just love the little, um, not so little guy. 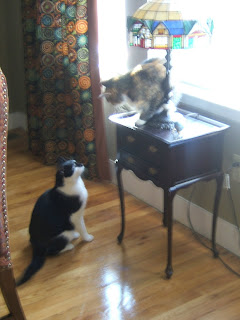 Molly sometimes tries to show him who's the boss! 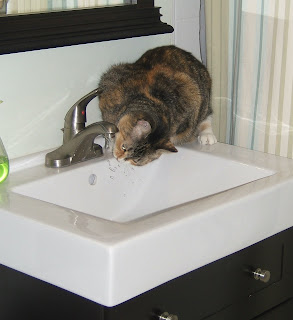 This is the only safe haven for Molly. I'm sure Oscar could jump up on the sink but for some reason it doesn't appeal to him. 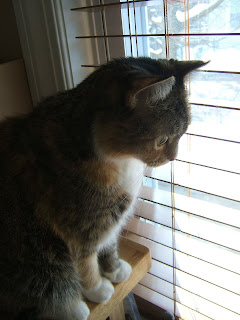 Molly, don't jump! Oscar will calm down, someday!
Stay tuned I'm sure they'll be a future post about the Tale of Two Kitties!

SweetAnnee said…
Your kitties are so cute..
Love the playful natures

dragonflydreamer said…
I just love your witty title. I can never think of interesting or witty titles for my blog. Molly and Oscar are so cute and it is so awesome that you rescued Oscar and now he lives with you. You cared enough to go past just thinking how he needed a home and did something about it.
January 28, 2009 at 6:21 PM

Salmagundi said…
I was wondering how they were getting along! Do two cats ever get along? I have no clue having never had a cat! Hope all of you are staying warm and safe! Sally
January 30, 2009 at 7:40 PM

Sweet Sage said…
Loved this tale!
They are both beauties, and I'm sure they will eventually work it all out. Who knows, they probably even snuggle up together while you're away!! Where would we be without our furry friends?!! Keep posting their adventures!
~kim
January 30, 2009 at 9:50 PM

C'est moi Claudette said…
Hi Elaine (one of my long time friends name)
I thank you for making the rounds to me on Pink Saturday. I love the ballet shoes.
I love Molly and Oscar and I think you should join us for Cat's on Tuesday. My post is up if you would like to link to Gattina the lovely lady who hosts it.
Just a thought.
Love Claudie

Michelle said…
Oh what a sweet rescue story! Your cats are so adorable. They remind me of Quincy and Mocha. Quincy is always chasing Mocha around and she's just too old for him. She's 13 and he's 2! I volunteer every Sunday at a cat rescue. I get my fill of cats there and love it. :)
February 3, 2009 at 2:47 PM