We had another snowstorm last night. I think it has snowed nearly every day since the official start of Winter. The most recent storm did not produce as much snow as expected so the roads were cleared rather easily and I was out and about in no time. 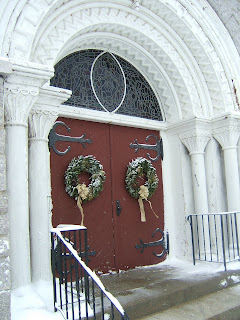 Armed with a shiny new memory card for my Fuji, I headed to Winchester for a photographic journey. If you've read prior posts on this blog you will know that I love Winchester. It is a beautiful town and I thought it would be especially beautiful with freshly fallen snow.

I like to photograph churches in the snow and especially at the holidays. Today,the churches still had their Christmas decorations up which was great. 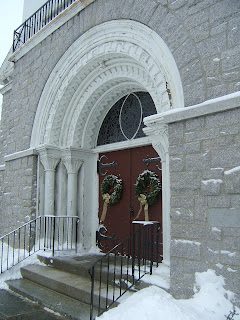 I love how the snow got lodged in between the stones on the facade of the church. 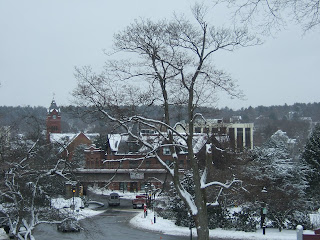 The church was set up on a hill so I took a view of the "village" below. That tall building is Winchester's Big Ben. That's what we used to call it when we were little. 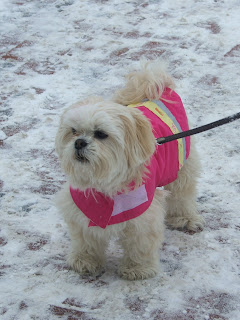 I met this cutie outside of Starbucks. As fashionable as she was in her little pink coat, she
was not allowed inside Starbucks. I would have let her in. 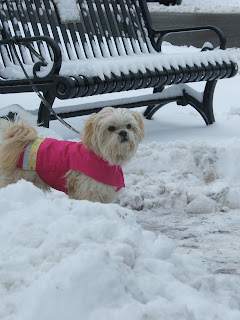 She was watching me drink my Cafe Mocha. Her owners had left her some food while they
drank their coffee inside. 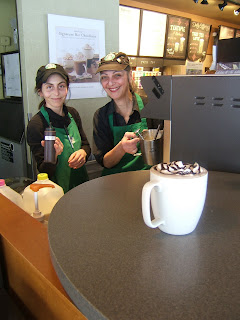 I told the baristas to make my Mocha real pretty because it was going to be photographed and put on my blog. I think they did a fine job! 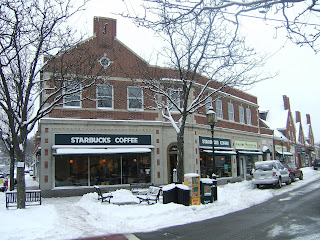 The snow really added to the whole Starbucks experience today. Warm inside, cold outside.
Good people watching from my windowside table. 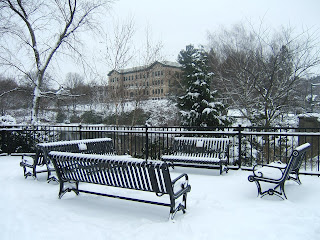 The people were just walking by. No one was sitting on these benches today. Or anytime soon
according to the 5 day forecast. Brrrr! 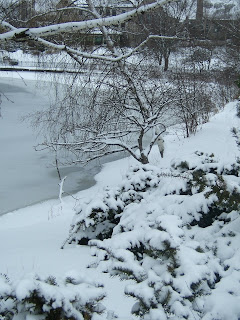 Even the duck pond had frozen. The ducks must have headed to Starbucks to warm up! 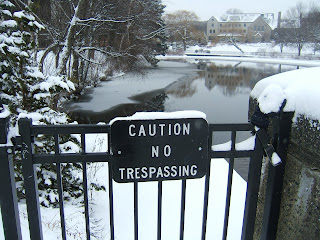 Guess this is where I stop. I don't want the local firefighters to pull me from the ice.
Actually I saw them go out on a call so no risky phototaking today. 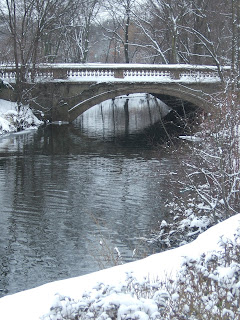 Just snow no ice on this side of the street. 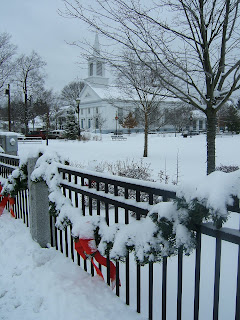 Oops, this isn't Winchester. This is my hometown. Our town common is still decorated for
Christmas. 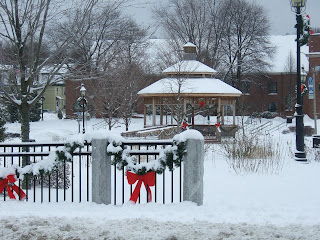 The gazebo is newly built by the Rotary Club, the Town Hall is in back of it. At this point, I was chilled to the bone. The Cafe Mocha was a temporary fix. Time for me to go home and get worked up over the football playoffs. Did I mention the New England Patriots didn't make it
to the playoffs this year? Oh yeah, I think I did! Well it still stings!
Tomorrow it's back to work. A good week to all. We'll talk soon.

Michelle said…
Elaine, it all looks so beautiful. The Starbucks is just dreamy. ;) I love that little dog's pink outfit. Hehe! Your little town is so quaint and so perfect in beautiful snowy weather. Stay warm! We have finally warmed up to almost 50!
January 12, 2009 at 2:55 AM

Elaine said…
Wow, Michelle. You're lucky. We're in the 20s and going down to 10 on Friday.

Anonymous said…
Your new blog format looks so beautiful with the falling snow and the grey background. Very atmospheric! I start a class today in PhotoShop, so hopefully I'll learn a thing or two. The class is in Harvard Square -- a great photo opportunity. I will think of your beautiful photos for inspiration.
January 12, 2009 at 9:17 AM

Salmagundi said…
Beautiful pictures! I love seeing New England pictures taken this time of the year. It gives me a feel for what my great grandparents might have experienced (although without our modern conveniences!!) No Starbucks in the l880s!!! Sally
January 12, 2009 at 11:02 AM

Can't believe they left that little dog outside! She looks like my Lily, only smaller. She's so cute I'd be afraid someone would steal her.

Glad you were able to get out and take some pictures. It's difficult when it's so cold and snowy but you did a nice job. Thank you for showing us around town : )

Fete et Fleur said…
Your photos are breathtakingly lovely! You live a beautiful area. I would be snapping photos all day long.

Anonymous said…
Thanks for the dreamy snow photos, I was born in Mass. but don't really miss the snow but still love to look!
January 14, 2009 at 11:15 AM