First Weekend of the New Year 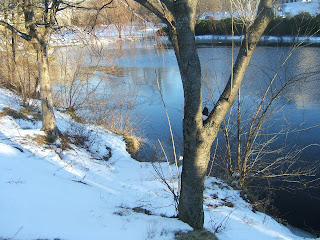 It's now Sunday night and I thought I would share some of the weekend's activities with you.
But first I have to tell you that it snowed again, a few days ago. When I wrote my last post I was not sure if my New Year's Eve party would have to be canceled due to the weather. It wasn't and we all had a good time.

Saturday afternoon, I thought I'd go out and photograph the snow before it melted. Ha, not much chance of any melting as the wind chill was 20 below zero. Winchester, one of my favorite towns, has a duck pond in the center of town so I decided to start there. 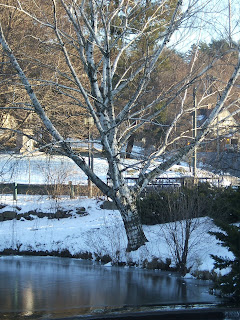 It was peaceful, no ducks, and bone chilling cold. Just a few photos and I was outta there! I returned home to get ready for my friend Don's birthday party and off I went out into the cold night. We had a great time with friends and Don was really happy. 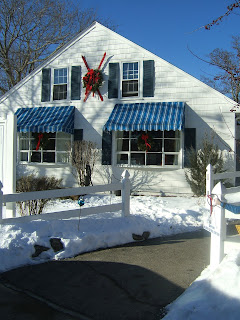 Sunday morning some of us got together to celebrate my friend Debbi's birthday. We have a tradition of going out for breakfast for Debbi's birthday and then we usually walk off breakfast at a nearby wildlife sanctuary. We bring bird seed and the birds fly down and take the seed right out of our hands. It's really cool! Today it was again quite cold so no bird feeding. Of course, we did the breakfast part.
We went to one of our favorite breakfast spots, the Village Pancake House. The house was originally built in 1660 in the Saltbox style. Forty years later it was remodeled into an Early American Colonial. 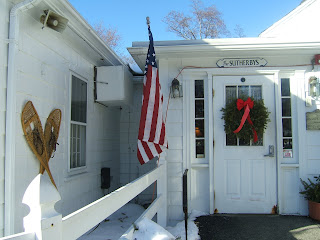 There are seven fireplaces. Lots of little rooms. It's just full of charm. 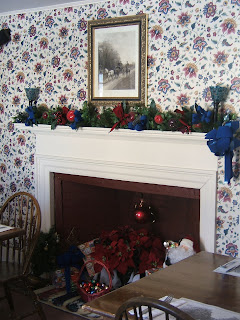 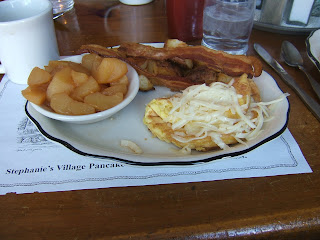 I opted for the cheese omelette, crispy bacon, home fries, hot apples, and... 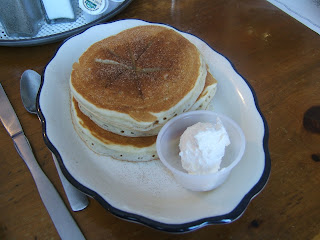 in lieu of toast, my favorite cinnamon pancakes which I split with Debbi. I had to share with her, she was the birthday girl after all! 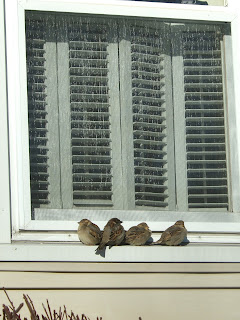 Here's where Debbi lives. These birds were sunning themselves on her windowsill.
So we did see birds after all! 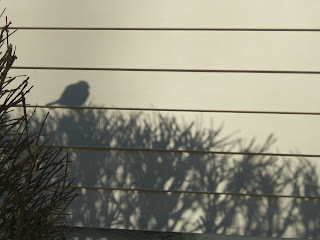 I thought this silhouette was interesting.
After breakfast, I visited with my mother at the nursing home. The poor woman
had to watch football with me, which she hates. I think she thought I wouldn't be watching since
MY team, the Patriots, didn't make the playoffs this year but she was wrong. Later on the winter sky was so colorful, I stopped my car and took a photo. I love a beautiful sunset.
Oops, I forgot to mention my rescue kitty Oscar is home with me after being fostered by a friend since July. The introduction to the new home and my other cat Molly has been a little rocky
and often amusing. But that story deserves a blog post all it's own.
So until next time ....

Sweet Sage said…
Beautiful photos, Elaine!
Looks like a great weekend ..
Hope the kitties settle in soon.
This week's SHADES should be fun!
~kim
January 5, 2009 at 9:16 AM

Sea Angels said…
Hello Elaine...can I come and live with you..I would get very home sick but I would manage ha ha everything looks fabulous food and photo's fabulous....
Hugs Lynn
Glad your party went ok xx
January 5, 2009 at 11:34 AM

Michelle said…
Elaine, this sounded like the perfect day to me! The photos are beautiful. I love it when it's cold and crisp and sunny! That breakfast looks so yummy!!
January 5, 2009 at 12:33 PM

Salmagundi said…
Cinnamon pancakes sound yummy! I loved the picture of the bird in the shadow. Great shot. Sally
January 5, 2009 at 8:18 PM

Yarni Gras! said…
I just love the little stories you share with your beautiful photos.
Thank you!
January 6, 2009 at 6:49 AM

p.s. Thanks for your visit to my blog!

Andrea - Under a Blue Moon said…
Gorgeous pictures - I especially like the ones of the birds on the window sill and the silhouette of the bird.