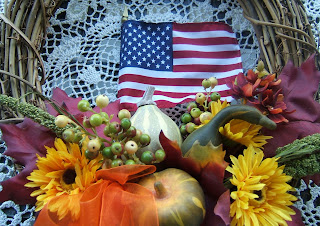 Today I am remembering with the rest of the nation the victims of 9/11.
First of all, I live near Boston and I hate the fact that two of the planes took off from our Logan Airport.
On that day seven years ago, I thought I couldn't possibly know anyone who was on those planes. In the next few days, I realized I did know someone. One of our bank customers who was also our pizza delivery boy was on one of the planes. He was flying west to help his mother move. He was a college student. The pizza guy we'd seen many times in the course of a year was on one of the planes. Shocking.
My sister taught at a Catholic School at the time and one of her fellow teacher's father's was on one of the planes too.
A week later we found out someone from our town, a woman who had not lived in the area very long had also perished that day.
On the first anniversary on our town common, a labryinth was set up. Our town was historically a shoe town So it was decided that we would set up 3000 pairs of shoes to represent the 3000 victims of 9/11. All participants in the project were asked to bring a pair of shoes to be placed on the common. We could decorate them or not. I decorated a pair of shoes (my sister's old bridesmaid shoes, kind of a raspbery color) with cut out angels and feathery wings and a poem. My sister decorated shoes with Mexican references to give a voice to the undocumented workers who were employed at the World Trade Center. Someone left a pair of hockey skates with an American Flag inside them on the common. It was a tribute to former Boston Bruin hockey player Ace Bailey who was enroute from Boston to LA that day.
Now we're at the 7th anniversary. I'm still remembering the victims. I hope you all will take the time to remember them as well.
Email Post
Labels: 9/11

Salmagundi said…
Loved the story about the shoe memorial. So sorry you knew of so many personally touched by the tragedy. I enjoy your blog - my father's family was from Maine, and I have visited there (as recently as this past May). Take care, Sally
September 12, 2008 at 11:55 AM